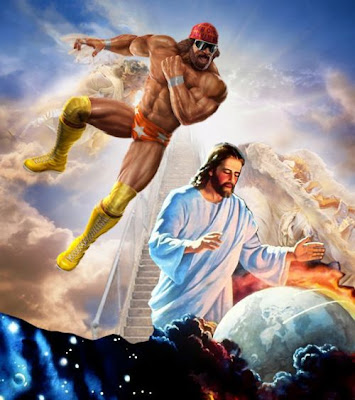 I genuinely can't put in to words how incredible the show was. Any gig that doesn't play many of your favourite songs and in fact only plays 13 songs and yet leaves you completely mesmerized has to be a good show. Sufjan manages to tap into a creative realm that most of us can hardly understand never mind tap into ourselves. It was a privilege to watch a genius perform to that level, complete with ridiculous costumes, fluorescent lights, synchronised eurovision type dancing, mental art work, balloons, streamers and all the while it made total sense in the very most non sensical manner. Jane over heard a bouncer on the way out saying to his fellow bouncer "That was fu*ked up!". Yes mr bouncer it was; in the most heavenly way.
Here's the setlist and some photo's I took...

Seven Swans
Too Much
Age of Adz
Heirloom
I Walked
Vesuvius
Get Real Get Right
All For Myself
I Want To Be Well
Futile Devices
Impossible Soul
--------------
John Wayne Gacy, Jr.
Chicago 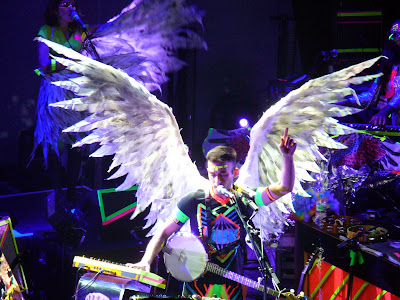 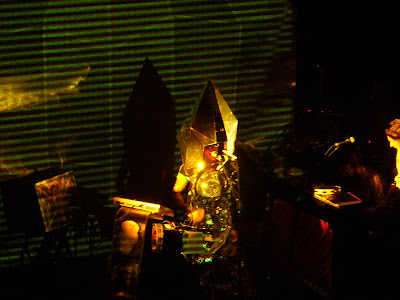 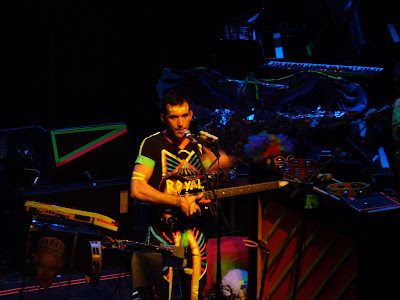 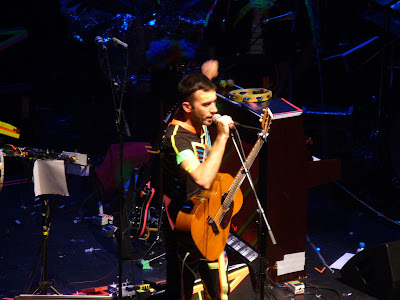 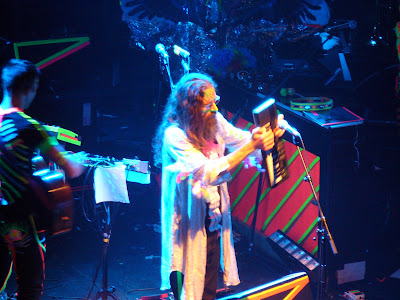 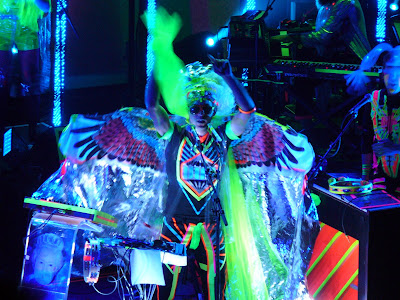 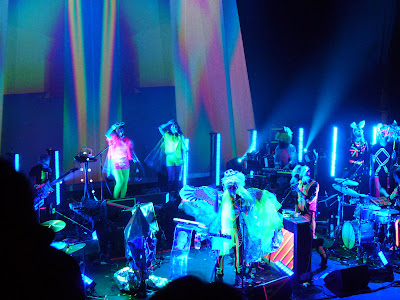 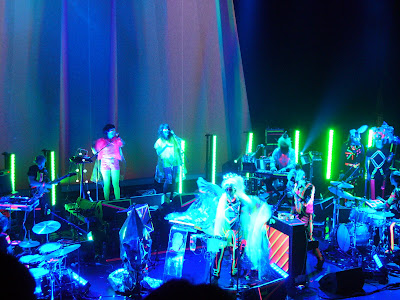 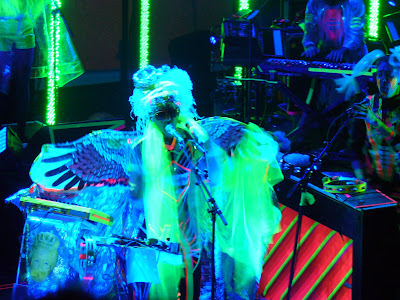 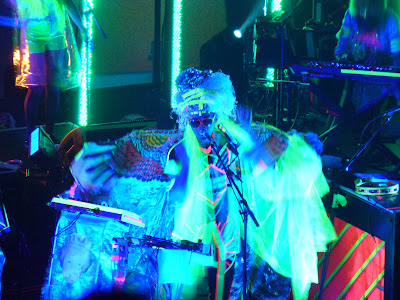 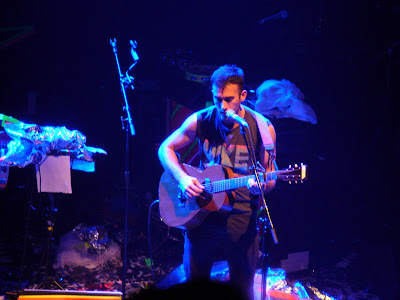 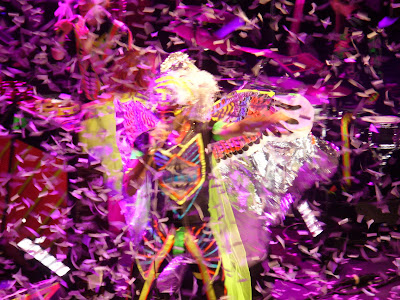 It's Friday; Robert Smith, he he so not amused

Farther up and further in

“The books or the music in which we thought the beauty was located will betray us if we trust to them; it was not in them, it only came through them, and what came through them was longing. These things—the beauty, the memory of our own past—are good images of what we really desire; but if they are mistaken for the thing itself they turn into dumb idols, breaking the hearts of their worshippers. For they are not the thing itself; they are only the scent of a flower we have not found, the echo of a tune we have not heard, news from a country we have never yet visited".

By now I'm sure most people reading this have seen a quote purportedly to be from Martin Luther King in relation to Osama Bin Ladens killing. The quote reads...

"I mourn the loss of thousands of precious lives, but I will not rejoice in the death of one, even an enemy. Returning hate for hate multiplies hate, adding darkness to a night already devoid of stars. Darkness cannot drive out darkness: only light can do that."

It's been quoted on the radio here in Ireland, been posted on a million facebook pages and tweeted a few million times and was published in the letters page of the Irish Independent yesterday.
For the bant I wrote into the Indo and for the double bant they decided to publish it. It was fun to see it there this morning. 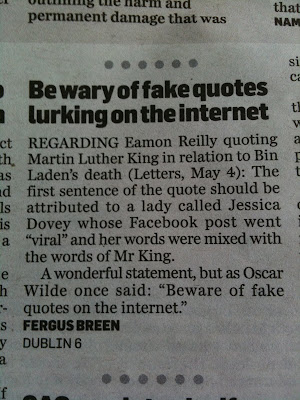 Making theologies out of our disappointments

I have a memory stuck in my head. I was at a youth event and a member of the prayer team came up to me to share a story of what had just happened to him. He told me how some kid had really hurt his leg and he had heard that God healed people. He then said 'Imagine; he came to me to pray about it before even going to the doctor! I told him to go to the doctor to sort it out'.
I'm not sure what response he was expecting from me, maybe something along the lines of 'Yeah imagine someone going to the prayer team for prayer about a sore leg when they can just go to the doctor like everyone else.'
I didn't argue with him, I think I was just saddened in my heart. What has happened that people have so little expectation of God intervening in their lives? I think one of the main reasons is people making theologies out of their disappointments. If we believe God is who he says He is and part of his nature is being a healer and we pray for someone and they don't get healed well we need a reason to explain it. More often than not the reason we give is that for some reason it wasn't God's will to heal or even worse that God has given us all our crosses to bear and actually this is a lesson that we must learn from. Sure after all isn't God is in control! There are a couple of examples in scripture of that happening but when we look at the life of Jesus who was the full representation of the Father we see nothing like that. We never see Jesus say to anyone 'Sorry buddy, my Dad is teaching you a lesson so I can't heal you. You gotta suck it up'. Even the example of the blindman in John 9 where through bad translation it alludes to the mans blindness coming from God the man is still healed. That's right, Jesus didn't say 'this is to teach him a lesson so we gotta leave him in his blindness'. No, he heals him. Always healed people. Sometimes it was their faith, sometimes it was a friends faith sometimes even it was a shadow of his disciple that healed someone but people got healed.
Of course there are always questions about why we don't get healed and the reality is that sometimes we can pray earnestly for years for people and they die disappointed. The reason why they weren't healed I don't think lies at the door of God. It lies in the mysteries of this free will laden universe with humanity and demonic angelic beings having free will to bring sin into the world (see Daniel 10 for a mental story about angelic free will and prayer). Amongst other things too lofty for us to grasp.
But what I do know is that Jesus came to redeem us and release us from the curse of sin and if I don't see answers to prayer I'm not gonna blame him for it. I know with all my heart that God is good. Actually good, not good in a sense that we can't really understand cause while he's comforting us with one arm he's actually inflicting pain with the other. No, he's good. He's a good daddy who loves His kids and if ever there is an example of that it's the cross. Jesus dying and ripping the keys of sin and death out of the hands of Satan, bursting forth from the grave and allowing us to enter into an amazing reality of the presence of Father, Son and Spirit.
We've all been disappointed but don't let the enemy lie to you that that means God isn't good or that he's holding out on you. The metanarrative of His word shows that he is a good God who is deeply in love with his creation and would go to the ultimate lengths to win them back. His grace is mind boggling. If you see someone else who has an answer to the very prayer you've been praying unanswered for years, celebrate in it. Let their victory become yours. Allow the testimony of Jesus to be a prophecy over your life and allow the Father to minister to you in the desert place trusting and knowing that he is good and makes all things new.
My sadness for that guy on the prayer team is that a day will come when his only hope for himself or his family is a miracle from the Lord and he will have no well of faith or testimony to draw from. On the flip side though I'm so thankful that God isn't spiteful and will gladly lend him some faith if he comes looking for it.
I should probably add that I've no problem with going to the doctor for sore legs. The medical profession in and of itself is a blessing. But lets remember that our God is the ultimate healer and physician so take his advice before you see someone else!
Posted by Ferg at 3:06 PM 1 comment:

You can check out his site here (don't hold me responsible if you're offended!)
Posted by Ferg at 5:48 PM 1 comment: 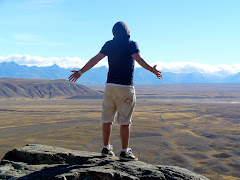